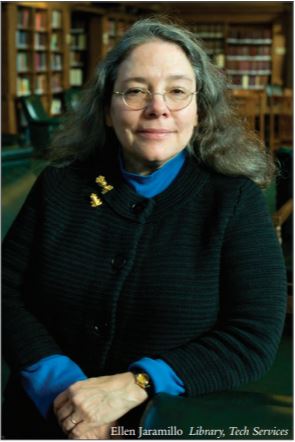 July 31, 2021
Tell me about your current role at Yale University?
I work in the University Libraries. I’m a librarian in the Technical Services Department, mostly specializing in cataloging a variety of materials in Spanish and Portuguese, and on Latin American and Iberian studies. We basically support study and academic research by providing access to what the libraries contain. I feel sometimes as though I’m constructing little keys that unlock access to just the “right” book, CD, video, etc. that will be useful to some researcher somewhere, to help them to write their own work or to teach a class.
What are your main responsibilities?
I create or edit bibliographic records for physical materials in the Library’s collections, most often new purchases. These records describe both the physical item and analyze the subject areas of the texts, and provide access points for the authors and subjects, etc. so that students, faculty and researchers can find out about the item, and also physically find it at one of the various Yale Libraries. Catalogers adhere to a vast number of international rules and standards regarding these descriptions (a bit like legal research). Besides appearing in Yale’s online library catalog, Orbis ( https://orbis.library.yale.edu ) the records we create are exported to an international database  that itemizes the collections of 15,600 libraries in over a hundred countries. This way researchers all over the world can locate a particular book or other library material, learn more about it and see if they can borrow it through interlibrary loan or if they need to plan a trip here to use the collection.
What do you like most about your work?
I really enjoy the continuous learning, and have audited Yale College courses or taken seminars to improve my knowledge base. I have to be able to read some of the book or other item so that I can assign the appropriate subjects for what it is about, most often in Spanish, Portuguese, Catalan, Galician, Asturian, etc. Concentrating on Spanish and Portuguese language materials actually can cover parts of five continents. I’m active in a small international professional organization of librarians and book sellers who specialize in Latin American Studies. We meet annually but several times daily our listserv fields questions, holds or promotes webinars, classes, conferences, projects, etc. on some aspect of Latin America or Iberia, and because of this I’ve made good friends in many countries. At times I also work with a variety of other languages, so I often learn a bit of history, politics, sociology, civilization, literature, the arts, science, etc. about wherever the material is from.
How did you begin your career?
I was hired at Yale shortly after graduate school.  That was 46 years ago…
What steps would you recommend one take to prepare to enter this field?
Librarians should have at least a Master’s degree in Library and/or Information Science, in addition to degrees or education in other subject fields, specialties, foreign languages, data systems, etc. For example, a music or science librarian should have a background in those fields. Some of the skills you can learn or develop on the job; it’s like an apprenticeship, but it helps to have a wide and deep knowledge background from which to draw.
What skills, abilities, and personal attributes are essential to success in your job/this field?
Overall I’d say curiosity, having a taste for detective work, puzzle solving or patterning, an interest in finding clues and making connections, doggedness in searching, ability to discern and apply rules. It also helps to enjoy editing, be a bit pedantic and have OCD.
If you could do it all over again, would you choose the same path for yourself? If not, what would you change?
I’ve wanted to be a librarian since I was 12. The public library in my town was the coolest place, with so much going on!  I thought I’d wind up working in a public library, but an internship in NY Public Library’s Foreign Language Library showed me how as a librarian I could also use the several languages I had studied.  Being able to do both at one time was the best of two worlds.
What does YLNG mean to you and how have you contributed as a member of the Steering Committee?
I’ve been on the Steering Committee almost since YLNG was formed, over 15 years ago. I helped design the logo and wrote our mission statement and objectives. YLNG has given me an opportunity to get to know employees in a wide variety of other jobs at the University, people I never would have met otherwise. Meanwhile, it’s also given me a chance to work on several initiatives in the community and on campus that spotlight Latinx culture and promote connections to educational and professional growth for employees and their families. Because of YLNG I was for many years on the Peabody Museum’s organizing committees for both the annual ¡Fiesta Latina! during Hispanic Heritage Month, and also for the annual Dr. Martin Luther King, Jr.’s Legacy of Social and Environmental Justice weekend events. This work led me to being named to the Peabody Associates Council. I’ve helped with logistics at a wide variety of YLNG-sponsored events over the years and served as an interpreter and tour guide for members of the foreign press when Ecuadorian President Rafael Correa visited Yale in 2014. Moreover, the existence of YLNG has given me a bit of courage to point out the occasional inappropriate comment or micro-aggression from other staff members and supervisors. I know that my YLNG colleagues and ODI will have my back in helping me to counter those feelings of isolation or of being “othered” within the university.